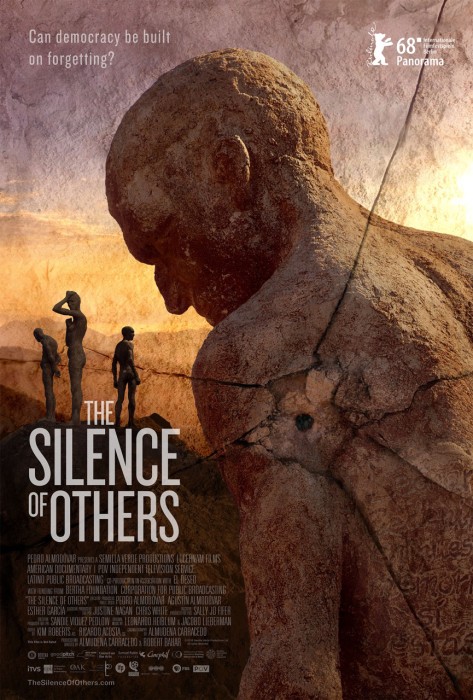 The Silence of Others offers a cinematic portrait of the first attempt in history to prosecute crimes of Franco’s 40-year dictatorship in Spain (1939-1975), whose perpetrators have enjoyed impunity for decades due to a 1977 amnesty law. It brings to light a painful past that Spain is reluctant to face, even today, decades after the dictator’s death.

Filmed with intimate access over six years, the story unfolds on two continents: in Spain, where survivors and human rights lawyers are building a case that Spanish courts refuse to admit, and in Argentina, where a judge has taken it on using the principle of universal jurisdiction, which allows foreign courts to investigate crimes against humanity if the country where they occurred refuses to do so.

The implications of the case are global, as Spain’s transition from dictatorship to democracy continues to be hailed as a model to this day. The case also marks an astonishing reversal, for it was Spain that pioneered universal jurisdiction to bring down former Chilean dictator Augusto Pinochet, and yet now it is an Argentine judge who must bring Spain’s own past to light.

The Silence of Others tells the story of this groundbreaking international lawsuit through the voices of five survivors who have broken Spain’s “pact of silence”and become plaintiffs in the case, including victims of torture, parents of stolen children, and family members who are fighting to recover loved ones’ bodies from mass graves across Spain. Guiding this monumental effort are Carlos Slepoy, the human rights lawyer who co-led the case against Pinochet, and Ana Messuti, a philosopher of law.

The case is making history: what started as a small, grassroots effort has yielded the first-ever arrest warrants for perpetrators, including torturers, cabinet ministers, and doctors implicated in cases of stolen children. It has brought the nearly forgotten case to the front page of The New York Times and has stirred a flurry of international attention.

Through this dramatic, contemporary story, The Silence of Others speaks to universal questions of how societies transition from dictatorship to democracy and how individuals confront silence and fight for justice. What happens when a country is forced to reck on with its past after so many years of silence? Can justice be done after so long?

The Silence of Others was written, produced and directed by Emmy-winning filmmakers Almudena Carracedo and Robert Bahar. Their previous film, Made in L.A. (MadeinLA.com), which tells the story of three Latina immigrants fighting for better working conditions in Los Angeles garment factories, was praised by The New York Times as “an excellent documentary… about basic human dignity.” Made in L.A. screened at 100+ film festivals, premiered on United States public television’s POV series and won numerous awards including an Emmy, the Henry Hampton Award and the Hillman Prize for Broadcast Journalism, among others.

Born in Madrid, Spain, Almudena Carracedo has developed her professional career in the US, where she directed and produced her debut feature film, the Emmy-winning documentary Made in L.A.

She is a Guggenheim Fellow, a Creative Capital Fellow, a Sundance Time Warner Documentary Fellow, a United States Artists Fellow, and the recipient of an honorary doctorate from Illinois Wesleyan University. Prior to Made in L.A., she directed the short documentary Welcome, A Docu-Journey of Impressions, which won Silverdocs’ Sterling Prize. In 2012 Almudena returned to Spain to begin work on The Silence of Others.

Born in Philadelphia, Pennsylvania, Robert Bahar lives and works between Madrid, Spain and Brooklyn, New York. He won an Emmy as producer/writer of the documentary Made in L.A., and he spearheaded a three-year impact campaign that brought the film to audiences around the world. Prior to Made in L.A., he produced and directed the documentary Laid to Waste, and line produced several independent films. Robert is a Creative Capital Fellow, a Sundance Documentary Fellow, and holds an MFA from the University of Southern California’s School of Cinema-Television.