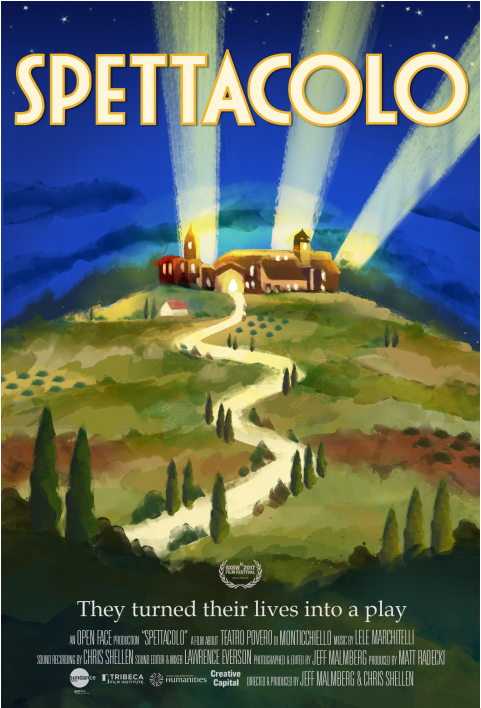 Once upon a time, villagers in a tiny hill town in Tuscany came up with a remarkable way to confront their issues – they turned their lives into a play. Every summer, their piazza became their stage and villagers of all ages played a part – the role of themselves. While neighboring villages turned to tourism for survival, Monticchielloʼs annual tradition kept the town together for 50 years, preserved in time.

Leading this process is Andrea Cresti, a painter and sculptor descended from Italian royalty whoʼs devoted his life to helping his village tell their story. At 75, he still scales scaffolding to adjust lights and pulls the stage apart after midnight rehearsals. But with no qualified heir and a future generation more interested in Facebook than farmers, he struggles to keep their tradition and town from crumbling.

Spettacolo tells the story of Teatro Povero di Monticchiello, interweaving episodes from its past with its modern-day process as the villagers turn a series of devastating blows into a play about the end of their world.

Jeff Malmberg and Chris Shellen are documentary filmmakers whose second feature documentary, “Spettacolo” is being released this fall by Blue Ice Films. The film is a portrait of a small Italian hill town that deals with conflict by turning the lives of its villagers into a play. The film is supported by a Guggenheim Fellowship and grants from the National Endowment for the Humanities, Sundance Documentary Fund, Creative Capital, and the Tribeca Film Institute. Their debut film “Marwencol” won over two dozen awards, including two Independent Spirit Awards, Best Documentary of the Year from Boston Society of Film Critics and Rotten Tomatoes, and the Grand Jury Prize at the 2010 SXSW Film Festival.