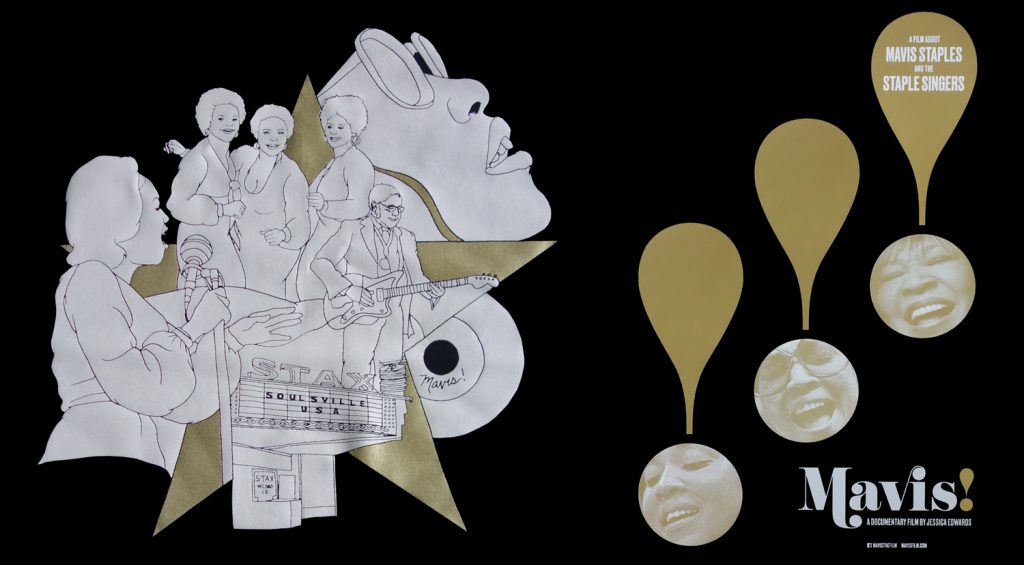 MAVIS! is the first documentary on gospel/soul music legend and civil rights icon Mavis Staples and her family group, The Staple Singers. From the freedom songs of the ’60s and hits like “I’ll Take You There” in the ’70s, to funked-up collaborations with Prince and her recent albums with Wilco’s Jeff Tweedy, Mavis has stayed true to her roots, kept her family close, and inspired millions along the way.

Featuring powerful live performances, rare archival footage, and conversations with friends and contemporaries including Bob Dylan, Prince, Bonnie Raitt, Levon Helm, Jeff Tweedy, Chuck D, and more, MAVIS! reveals the struggles, successes, and intimate stories of her journey. At 75, she’s making the most vital music of her career, winning Grammy awards, and reaching a new generation of fans. Her message of love and equality is needed now more than ever.

Jessica Edwards has a broad background in the film industry as a director, producer and publicist. Her award-winning short documentary Seltzer Works premiered at SXSW and went on to screen at Hot Docs, Full Frame, Silverdocs (now AFIDocs) and many other festivals around the world before airing on the prestigious PBS documentary series POV in 2010. Her subsequent film, Tugs, screened at SxSW, Full Frame, Silverdocs and BAMCinemafest in Brooklyn in 2011. Her short film The Landfill, which she co-directed with Gary Hustwit, premiered at Sundance in 2012.

Edwards has a BFA in Cinema from Concordia University in her native Canada and a Masters Degree in Documentary Studies from The New School in New York City.

Gary Hustwit is an independent producer and filmmaker based in New York and London. He worked with punk label SST Records in the late 1980s, and was subsequently involved in a wide range of projects in music and book publishing before he started Plexifilm in 2001. Created as a DVD label with a focus on music-related films, Hustwit expanded the company in 2003 to include producing original documentaries. The first film he produced was the award-winning documentary about the band Wilco, I Am Trying To Break Your Heart. Other music documentaries included Moog, about the music inventor and godfather of electronic music Bob Moog; Oddsac, a film collaboration with the band Animal Collective, and Drive Well Sleep Carefully about the band Death Cab for Cutie, among many others.

In 2007 he made his directorial debut with Helvetica, a documentary about graphic design and typography. The film marked the beginning of a design film trilogy, with Objectified, about industrial design and product design following in 2009, and Urbanized, about the design of cities in 2011. Collectively the trilogy has screened in hundreds of cities around the world and has been broadcast on PBS, BBC, HBO, ARTE, YLE and dozens of other television outlets. Hustwit was nominated for an Independent Spirit Award for Helvetica, and was named one of the 100 Most Creative People in Business by Fast Company.

Rachel Mills started her career in filmmaking running the much lauded, Edit Center, selecting and shepherding documentary and narrative films through their award-winning workshop process. Some of the films she oversaw during her tenure include: Winter’s Bone, Gregory Crewdson: Brief Encounters, and Garbage Dreams. In 2010, Rachel produced A Matter of Taste, a feature documentary that profiles famed chef Paul Liebrandt. After premiering on HBO, the film won a James Beard Award and soon after received an Emmy nomination. In 2011, Mills left The Edit Center to travel the country as she field-produced one of cable television’s top-rated docu-series, American Pickers for the History Channel.

In 2013, Rachel partnered with award winning filmmaker, Joshua Zeman of Cropsey, to produce and co-star in Killer Legends, a documentary investigating the crossroads of urban legend and true crime. Killer Legends went on to simultaneously hold the #1 spot in Horror and Documentary film on iTunes in the summer of 2014.

Amy Foote is a freelance documentary editor and co-producer based in Brooklyn, NY. Her editing credits include; 1964 (PBS American Experience) the Emmy-nominated film, A Matter of Taste: Serving Up Paul Liebrandt (HBO, BBC); For Once In My Life, (PBSIndependent Lens, SXSW Audience Award 2010, IDA Best Music Documentary); The Least of These: Family Detention In America (SXSW/Snag Films); and the Emmy-nominated film,Finishing Heaven (HBO). Her co-production credits include A Matter Of Taste and Flying: Confessions of a Free Woman.

Maya Tippett is a freelance filmmaker living in Brooklyn. She graduated with honors from Pratt Institute with a BFA in video/film. Her thesis documentary short film, Worse than the Demon, premiered at BAM in 2013. She has made various short documentaries and is currently making a short called Treasure Island. Mavis! is the first feature film she has worked on as an associate editor.

FILMMAKER STATEMENT The first time I saw Mavis Staples, it had been raining all day in New York City. She was scheduled to perform that evening at an outdoor concert in Brooklyn, and I wondered if the show would be cancelled. But the rain cleared just before show time, and I sat on a soggy… Read More

The first time I saw Mavis Staples, it had been raining all day in New York City. She was scheduled to perform that evening at an outdoor concert in Brooklyn, and I wondered if the show would be cancelled. But the rain cleared just before show time, and I sat on a soggy picnic blanket with friends and watched as this amazing woman and her band came on stage. Her voice reverberated through the trees as she sang, testified, preached, moaned, wailed and gave everything she had. The entire audience, young and old, was brought to its feet, and we all left the concert inspired and energized.

When I got home that night, I wanted to know everything I could about Mavis and her family, the Staple Singers. My search for a documentary about her life proved unsuccessful, and I couldn’t believe that no one had documented the lasting impact of the Staple Singers’ music. So I set out to make that film myself.

I delved deep into Mavis’s story, which spans seven decades and as many musical genres. I was blown away by the incredible voice that was belting out gospel hits at age 13. I was moved by her freedom songs of the ’60s, and by her stories of touring the segregated south with Martin Luther King. I was enamored with her amazing style and groove in the soul-filled ’70s. I discovered that she and Prince had spent years recording together, and that she’d had a youthful romance with Bob Dylan. What a history!

But as I started shooting the film and we began putting it together, I kept coming back to that night in the park, and how Mavis’s story isn’t about the past, it’s happening now. The fact that she is 75 years old and is still a vital and important artist, and not just out there performing as an oldies act, informed the way we made the film. I didn’t want the film to feel ‘historical’ even though we cover so much of Mavis’s history, and with it, the history of American music. So I felt it was important to include as much contemporary footage as possible, both of Mavis and the locations of her stories.

The biggest challenge was how to capture a career that spans over 60 years in one film, which is an impossible task. Inevitably some of Mavis’s story needed to be left for viewers to discover on their own. But what was important to me was to try to celebrate the importance of her legacy and share some of the inspiration, passion and love that she’s instilled in me through her music and her life.