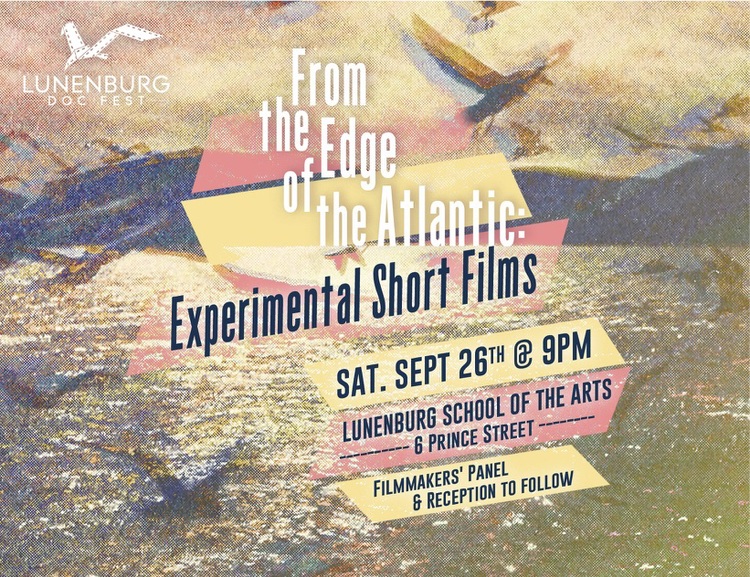 The From the Edge of the Atlantic: Experimental Shorts screening showcases and celebrates Atlantic filmmakers working on the edge of documentary. The Festival is eager to incorporate films that explore different styles of filmmaking, where films emerge from the interplay between sound, image, atmosphere and place rather than traditional storytelling approaches.

Herb Theriault uses film to explore things he finds interesting, sometimes tiny things, sometimes big ideas. There is often an overlap between the areas of nature, technology, and an occasional hint of the other worldly.

What Happened to Esther

What Happened to Esther tells the story of an African-Nova Scotian midwife and what happened to her on the day of the Halifax Explosion.

Jenna Marks is an indie filmmaker based in Dartmouth, Nova Scotia. She graduated with a BFA in Film in 2013 from NSCAD University. Since graduation Jenna’s work has been focused in experimental animation, though she looks forward to branching out to tell different stories. Jenna has won awards including best music video at last years Atlantic Film Festival. She is currantly working on a short animation through NS Communities, Culture and Herritage to be completed by next spring; she has just finished filming her fist live-action short and is planning to go back to school in Sept, 2016.

A video poem set on the beach in PEI about memories, hopes and dreams.

Award-winning filmmaker and owner of Yellowwood Pictures, Bunthivy Nou is an actor/director/producer/editor. Since 2003, Bunthivy has worked on over 20 short films and two feature film productions. A film grad from the University of New Brunswick, she’s also trained in directing at the Summer Institute for Film and Television and at the Atlantic Filmmakers Co-operative. Bunthivy is a member of the New Brunswick Filmmakers’ Co-operative and WIFT-AT. She’s currently in post-production in her latest short film “Green Light” which wrapped shooting June 2015.

It has been over 20 years since construction crews walked away from a multi-million dollar resort project on the coast of Nova Scotia, never to return. Half completed, the building sat empty and abandoned in the wild wilderness of the maritime coast… until now. An ambitious mission begins, to bring new life to the forgotten resort by transforming it into the ultimate skate retreat, spanning across three floors and 175,000 square feet of smooth concrete.

Alex Craig is a filmmaker who explores a wide array of subject, from the zany camp of 80’s nostalgia to modern skateboard videos. Working in both commercial and avant garde disciplines, Alex’s work has been screened all over the world.

Negative images highlight the forms and rhythms of life in the garden.

Dawn George is an interdisciplinary artist working in experimental video, film, photography, and performance.  She received a Bachelor of Applied Arts from Ryerson University and a degree in performance from American Musical and Dramatic Academy in New York. Ms. George’s media work has been screened at festival and galleries throughout North America.  Her current practice focuses on blending animation with recorded images to explore the relationship between the material and natural worlds.

The Atom Station is a film centred upon the industrial and natural landscape of Iceland, interfusing the cultural, economic and ecological forces that shape the island.

From vaporous hot springs and lava fields to the peculiar structures of geothermal power stations, the film combines Iceland’s dramatic and volatile terrain with two corresponding voice-overs from the past and present: poet W.H. Auden, reading ‘Journey to Iceland’ (1937), and environmental activist Ómar Ragnarsson. Auden’s contemplative poem expresses a desire to escape from his British homeland, and the trappings of modernity; to fully immerse himself into Iceland’s otherworldly landscape and mythic nature. Ragnarsson’s contemporary callings are a rallying cry to protect a vital wilderness, seen as under threat from international aluminium corporations that are exploiting Iceland’s abundant hydro and geothermal energy. The Atom Station features an electronic score by Lord Mongo, continuing the collaborative film projects between the musician and director. The film is titled after Halldór Laxness’ satirical novel The Atom Station (1948), which imagines Iceland sold to the USA, as a strategic military-industrial base. nickjordan.info/theatomstation.html

A hilarious comic documentary about Michel Williatte-Battet attempting to carry out a normal day’s activities during a Suête wind storm. Suêtes are hurricane force south-east winds that beat down on the Acadian French coastal area of northwestern Cape Breton Island.

Filmmaker Neal Livingston has made over 40 films on a wide variety of topics, from the political to the personal to the humorous and have been shown in film festivals locally, nationally, and internationally including at the Museum of Modern Art in New York, and the 2010 Winter Olympics in Vancouver.  Livingston lives near Mabou, Cape Breton, Nova Scotia.

Ísland is a self-reflexive piece about the filmmaker’s interaction with the land, people and culture of Iceland. Shot during the midnight sun in June 2012.

Ryan Walker is an emerging photographer based in Toronto, specializing in social documentary, editorial photography, and visual advocacy. Having graduated in 2013, Walker holds an MFA in Documentary Media from Ryerson University. His creative practice explores intimate storytelling through film and photographic mediums. Walker’s work has been exhibited in Canada, Australia and the United States. He has also received several awards, grants, and scholarships including the Magenta Flash Forward Emerging Photographers award, an Ontario Graduate Fellowship, and a Magnum Photos scholarship. Propelled by a curiosity to explore unique narratives, Walker’s work attempts to blur the boundaries between photojournalism, documentary, and conceptual art.

A one way conversation. Tell Me is an intimate portrait of the relationship between the filmmaker and her father. Daring to ask the most personal questions, Mitchell captures heartbreak, humour and our universal mortality in three minutes.

Shandi Mitchell is an author and filmmaker. Her award-winning short films Baba’s House and Tell Me and feature, The Disappeared (2012) have been featured at festivals across North America including TIFF, Eastman Kodak House, New York, and Vancouver. In 2008, she was awarded the Canada Council’s Victor Martin-Lynch Staunton Endowment in Media Arts.  Her first novel was Under this Unbroken Sky (2009).

Join us for a free Filmmakers’ Panel followed by an informal reception for the audience and filmmakers with the following filmmakers in attendance:

Darrell Varga is a writer, filmmaker and professor of film history and documentary filmmaking at NSCAD University (Nova Scotia College of Art and Design), where he held the position of  Canada Research Chair since 2005 and is now chair of the Division of Art History and Critical Studies. He is has published widely on Canadian cinema and is the author of the book, forthcoming later this fall: Shooting From the East: Filmmaking on the Canadian Atlantic from McGill-Queen’s University Press, the first comprehensive study of film history in the Atlantic region.

From the Edge of the Atlantic: Experimental Shorts is presented with the generous support of Arts Nova Scotia

Filmmakers not in attendance