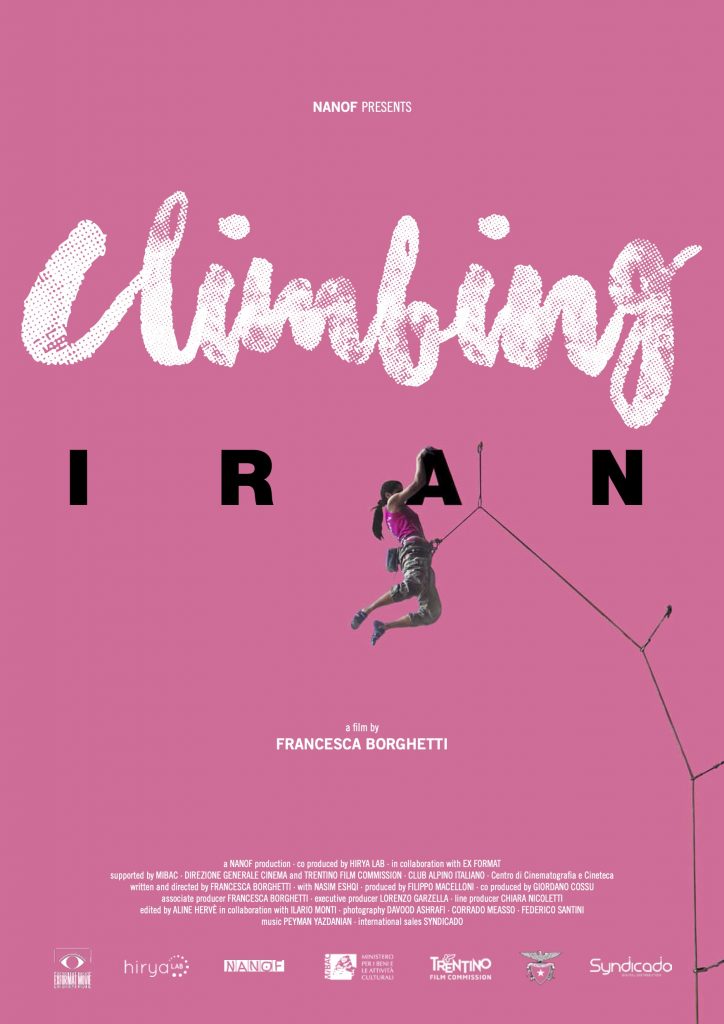 “People often ask me: “why do you put nail polish?” When I climb they are all gone and scratched. Then I look at them and I feel: “Oooh! I did a lot of climbing today!”.

Nasim has strong hands adorned with hot-pink fingernail polish. She is the pioneer of outdoor climbing in Iran, where women are supposed to train on ‘indoor’ walls only, during set hours, and only among other women. “The name of my country is Islamic Republic of Iran.It means that women have to cover their head, even if you are a tourist… It’s the law… it’s like for the seatbelts…”.

After being a young champion in different sports -from karate to kickboxing- Nasim followed the call of the mountains, and decided to go beyond the barriers imposed on women in her country setting up her own route on the Persian rocks.  “Gravity doesn’t ask me what my passport is. It takes you down in the same way, it doesn’t matter if you’re rich or poor, black or white, Iranian or Italian…”

The film portrays an extra-ordinary woman determined to push the barriers opposing her passion, whether they are physical, social, psychological, geographical or ideological.

Committed to “change things little by little“, she brings a few other young women to the walls of Polekhab, outside Tehran, teaching them how to climb and get independent.

Nasim has a dream that can become reality: open a “new route” right on the Alps to become part of the international climbing’s elite.

With a background in Cultural Anthropology, Francesca has been working in documentaries since 2000, receiving her Eurodoc diploma in 2010. She developed, wrote, produced a number of documentaries within DocLab and Fabulafilm, Rai Storia, Rai 5 and Babel Tv. Francesca has been the Spokesperson for Doc/it – Italian Documentary Association from 2015-2017. She recently worked 2018-2020 for the TV program PETROLIO – RAI responsible of national and international documentaries acquisition. CLIMBING IRAN is Francesca’s first feature documentary as director.